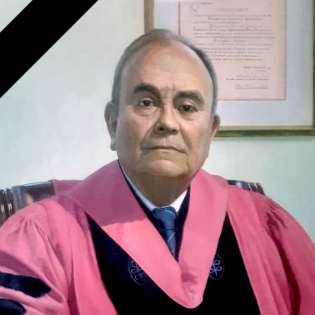 July 2022. It is with great sadness that we share the sad news of the death of our beloved Dr. Cruz. We accompany his wife, children, grandchildren and great-grandchildren in the face of this irreparable loss.

Dr. Cruz was born in León, Nicaragua in 1931, but grew up in Managua. After attending elementary and high school in various schools around the country, he did an additional year of high school at The Bullis School, Silver Spring, Maryland.

He began his law studies at the Universidad de Oriente & Mediodía, in Granada. When this was closed by governmental disposition, he eventually moved to the National University of León, where he obtained his Doctor of Law degree in 1956. Three years before graduating he had married Sonia Valle Peters, with whom he had four children: Ernesto, Sonia , Eduardo and Rodrigo.

After six years of professional practice, he left with his wife and children in 1962 for Cambridge, Massachusetts, in pursuit of a Ph.D. in Political Economy & Government at Harvard University, which he received in 1968. In the middle of that year, he assumed the Rectorship of INCAE, remaining at its head until 1980. During that period, he shaped the institution.

Upon leaving INCAE, he moved with his family to Miami, Florida, where - after his wife graduated from the University of Miami School of Law and joined a prestigious law firm - he obtained it, from the same School, in 1990 his third doctorate (JD), with an emphasis on Corporate Law. For three decades he served as a bank director and general counsel for international companies, such as BAC INTERNATIONAL BANK CREDOMATIC and GBM CORPORATION.

He retired at the end of 2012, returning to Nicaragua, where he lived next to the institution to which he dedicated the best years of his life.