How to ensure the continuity of the family business with its own name?
Skip to main content
Publication

"I don't want them to see me as the boss's daughter": Yasnary Castellanos writing the story in the family business with its own name

At the end of 2019, Yasnary made a decision that marked her path in the family business and the beginning of great changes driven by her.

"I pay the money to the company if this doesn't work," Yasnary said when faced with the refusal to invest in something that seemed to have little impact on the organization's processes, such as email.

After graduating from her MBA at INCAE in 2019, Yasnary Castellanos returned to Agencia Aduanera Castellanos, a family business run by his parents, which has been in the market for 25 years and has a presence in Honduras, Costa Rica and Nicaragua. This 28-year-old professional came to assume the Honduran Management with the determination to lead innovation in the company and put into practice everything learned during her master's degree.

Despite the clarity of his determination, the path was not easy and he had to deal with phrases such as: "We have worked like this all our lives", "This is how we have done it all the time and today we are successful", no However, we can be even more successful, Yasnary thought.

From the first day, he identified several processes with an opportunity for improvement, one of them was the use of email, "We used email only on the computer that we had assigned within the company, we could not use email outside of work in another computer.” Yasnary described. Therefore, if an emergency arose, he could not attend to it if the collaborator was not at his job because he did not have access to the information outside the organization. Due to this, he proposed migrating to another platform that would improve organizational efficiency and flexibility, however, he faced resistance from the members of the company, as it was a value that was perceived as an unnecessary expense. Yasnary trusted this idea and assuming all the risk of this decision, it was approved to carry out the initiative at the end of 2019.

No one imagined that the following year, 2020, a pandemic would change the world scenario and no one would be able to leave their homes. Fortunately, on March 1 of that year, the Technology team had already delivered the completed project and with the staff trained to use email and other applications from anywhere. What seemed like an unnecessary decision saved the agency's business and thanks to this change no one stopped working during the pandemic lockdown. This fact gave Yasnary the security to continue defending his ideas and continue the technological and operational change that he expected for the organization. "The company's productivity level has doubled, as a result of the first changes that have been made," he told us.

An apparently simple topic like the change of an email, was the project that marked the beginning of the change of mentality of the managers with more years of experience and paved the way for the transformation that she envisioned for the organization: After 25 years, we had reached the point where we had to reinvent ourselves, I wanted to differentiate myself from my competition, in Honduras there are 400 customs agents, we all do the same thing, but what am I going to do to make a difference? Yasnary reflected.

Working in the family business was not something new for her, since she was little she knew that wanted to ensure the continuity of the work started by his parents, and from the college stage he became involved in operational tasks, billing and even those that required procedures and procedures at customs. All this helped her to have an overview of different areas of the company.

He obtained his Bachelor's degree in Customs Administration from the National Autonomous University of Honduras and before joining INCAE, he had not held a managerial position. However, he always put among his goals to one day occupy the position of his father. He knew that, to achieve this, he had to build a career that would help him have a notion of administrative, financial, accounting, and operational issues. That is why he chose an MBA for his preparation: "I wanted to be able to diversify because decision-making is my day-to-day, so I did need something that would help me reinforce that type of knowledge that perhaps my degree did not cover very widely," he stressed.

His life at INCAE

“Being at INCAE is another world”, although she had already heard of INCAE, once inside she realized that she had accepted a great challenge. The first, reading the cases: “I didn't have the habit of reading, that's where I developed it. I was faced with the fact that I had to read more than 90 pages in a day, for me that was impossible, ”she recalled. During her classes at the Costa Rica campus, she took the opportunity to relate everything she learned to the administration of the family business and how she could implement it upon her return. Her greatest advantage was knowing the areas of opportunity that her organization had and how the classes shed light to be able to innovate the processes in the agency.

So every Saturday, in a disciplined manner, she communicated with Don Agustín, her father, to tell him what she had learned and how he could pave the way for her when she joined the company. In this way, she used the experience of her teachers to ask for recommendations and comment on situations they faced in her company and how they could solve them from a more sophisticated management perspective.

One of the great promises of INCAE is the solid network of contacts that is woven during the time of studies and Yasnary experienced it very closely: “INCAE has not only given me the knowledge, but also that incredible network of contacts. My financial manager is now a very good friend of INCAE, the project manager was a good friend of INCAE. Many friends are clients,” she commented.

Currently, this 28-year-old Honduran leader is about to finish the family succession plan program that the company has to take over the general management of the agency, the position of her father. This plan contains a body of knowledge that Yasnary had to accomplish before assuming leadership, and she has successfully achieved it even sooner than expected. In addition, today she is also close to finishing her degree in another field of study that she is passionate about: Law.

And how has Yasnary been able to make his mark within the family business? The help of God, her wise decisions and the support of her parents, as she mentioned, have allowed her to carry out actions with her own name. "I have always told everyone around me: I don't want them to see me as the daughter of Don Agustín and Doña Sayda... the changes that have been successfully implemented so far have made me create that proper name," she manifests.

What should a professional who wants to continue and lead the family business do?

Yasnary considers that there are two key points: career preparation and soft skills development.
The first is essential because "although I am not an expert on all issues, I understand and can make a decision based on what I know," she says. The second is very important to lead and work taking into account the differences of each collaborator and thus get the most out of their potential.
For her, doing an MBA was the best decision: "I always focused my classes on how I could implement it in my company... Unlike some of my colleagues, I already knew where I was going to go and what I could improve." 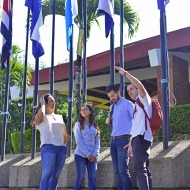 It trains successful leaders, capable of applying the best business techniques, with a comprehensive vision of Latin America and with the ability to cause a positive change in the organizations and communities where they work, seeking integration between two worlds: developed countries and. ..

Soft skills: How to develop them?

Marketing in the Metaverse

How to avoid the failure of the family business?

The scene is perhaps more frequent than is thought: a group of siblings with abilities, interests, needs and behaviors...

Manage a family business It's hard work, but rewarding. The biggest obstacle facing the...