THE MANAGER AND THE TECHNICIAN NEED TO HAVE A POLITICAL AGENDA

Forrest D. Colburn is Professor in the Department of Latin American and Caribbean Studies at Lehma College and in the Ph.D. and M.A. Program in Political Science at the City University of New York (CUNY), an institution in who has been a teacher since 1997.

He has been associated for many years and teaching classes at the Center for Competitiveness and Development of INCAE Business School, where he has also participated in various investigations. He has university studies in economics, a master's degree (1980) and a doctorate (1983) in Government (public policy) from Cornell University.

Within the framework of his class on politics, within the CAHI Fellows program, we had the opportunity to conduct this interview with him.

To get started, please tell us about your experience and the class you teach in the CAHI Fellows program.

Forest: I am from the United States. My field is politics. I have taught for many years at INCAE and have also worked with universities in the United States, such as Princeton University. I have worked with in several Latin American countries: Mexico, Colombia, Peru and in Central America.

I have been teaching politics for four years in the CAHI Fellows program. There is always a good group; the selection process has been very successful, it is always a group with high-level people with great commitment. It is also notable that the members of the group get along with each other.

Integrating a kind of political analysis in this process, arises from understanding that in these countries politics exerts great influence on all aspects of public life and can complicate the life of a manager from one moment to the next. You can be in the private sector or at the head of a non-profit organization, you must have the ability to understand the environment and be a political actor, to defend your legitimate interests.

The health sector is no different. I give as an example the expression of a great friend in Guatemala, who spent several years in charge of a Hospital; he told me “I'm a doctor, but I spend half my time on political issues. It is not something that I like, but it is a necessity.”

What do you consider to be your greatest contribution to the CAHI Fellows?

Forest: In the classes I have tried to make a political analysis of the situation in the countries of the region. The approach that I propose is very practical, so that any manager or technician has the ability to understand their environment without putting on any political color, without emotions, with the help of specific instruments that allow them to identify the problem, understand the strategies that are available and carefully study the consequences of each course of action.

It is common to see cases in which leaders are ready to act, but when they take the time to do an exhaustive analysis, without involving emotions, they end up saying “I was ready and wanted to do this thing, but I realize now that it is not the right strategy, that it is better to go another way.”

That is why I insist on the need to have an agenda. What I affirm to the participants, who are mostly high-level technicians, is that if you don't have an agenda in politics, then you are on someone else's agenda. In other words, paraphrasing the great French leader Charles de Gaulle, "either you are at the table or you are on the menu."

Isn't technical knowledge enough, being experts in their fields?

Forest: It's a shame, but politicians always have their interests and, although they talk about the country and are aware of the need to expand health coverage, their interests are sometimes very short-term and attached to their promotion plan.

If a technician is not capable of generating his agenda and being a political actor, then chances are lost for him to make a real contribution and have a positive impact on the health of his country.

This is also in the face of a context that has been getting more and more complicated. In the last four years there has been a weakening of the democratic systems, in which bipartisanship, until very recently, installed in most Central American countries, has given way to chaos, almost anarchy, where anything can happen.

The traditional parties have lost strength and credibility, so there is a lot of uncertainty, anarchism, the temptation of populism present, a mess in which technical people are pushed aside.

From this perspective, why is a program like CAHI Fellows relevant?

Forest: The great challenge then is to seek governability, strengthen democracy and create conditions in which people with technical knowledge, capable and committed, gain influence and are capable of defending their agenda, an agenda for collective well-being and the improvement of systems. of health. Otherwise, they will be put aside to make way for people who are perhaps less prepared, but more faithful to the governor in power. This is not what we want.

The challenge we are facing is to prepare people. I believe that today more than ever it is important for each technician to analyze the political reality, to be able to act in this sphere and push a well-developed agenda, so that it can improve health systems and improve the living conditions of the population. from this part of the world. 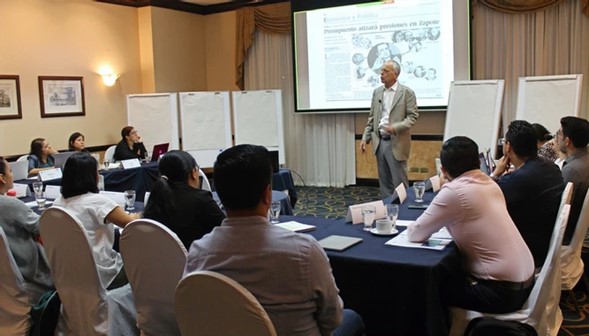 THE IMPORTANCE OF THE CRITICAL VISION

Alcira Castillo has extensive knowledge about...

PROJECTS THAT ADD VALUE TO THE REGION

Roy Zuñiga has a Ph.D. in Industrial Engineering with an emphasis on...

Luis Figueroa is a professor, researcher and consultant on the topics of...